Proper use of veterinary drugs:
In order to keep livestock healthy it is very important to observe strict adherence to recommended treatment, the highest percentage of which should be done by a trained veterinary personnel and a few can be done by experienced farmers. 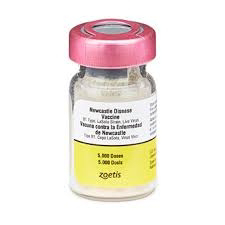 Vaccines are active or inactivated disease organisms used to boost immunity of the livestock from specific diseases. They have played a major role in eradicating some of the most dangerous diseases both in man and livestock such as smallpox in man and Rinderpest in animals.
Application of vaccines is a cheap way of protecting your whole flock against devastating diseases, such as Newcaste disease, which cannot be treated and can kill all the chicken in an entire village.
Another example of a deadly disease which can kill all your goats and half of your sheep is Goat Plague or Pest of small ruminants (PPR); there is no treatment against PPR but it can be prevented by vaccination.
Keeping up to date on which vaccinations are important for success of livestock in your area is a very important management tool.
Vaccines need to be kept constantly chilled in a fridge or frozen (depending on manufacturers instructions), as they deteriorate rapidly and loose efficacy within hours when exposed to warm temperature.
New, so called ‘thermostable’, vaccines are becoming available, which are more resistant to warm temperatures and can be kept for days (sometimes weeks) without cooling or freezing.
Once a vaccine vial has been opened the whole contents should be used quickly. Unused vaccine remaining in the open vial cannot be kept for later use.
It is advisable for several farmers to team up and have their animals vaccinated together on the same day. In this way they will share the costs for buying the vaccine, make full use of the vaccine vial contents and the vaccination becomes cheaper.
Vaccines should be handled and administered by trained veterinary personnel. Most often you will have to rely on the local veterinarian for vaccinating your animals. Chicken vaccination by eye-drop against Newcastle disease can be administered by trained farmers.
Veterinary drugs contain substances, which are potentially toxic and harmful to humans. After giving a drug to an animal these substances remain in the animals’ body for some time until they have been completely excreted.
While these toxic substances remain in the body they can be found in the muscle (meat) and also in the udder (milk). A person consuming meat or milk from an animal that still has drug substances in its body will ingest harmful and toxic substances.
To prevent this from happening drug manufacturers provide a withdrawal period for each drug. The withdrawal period is the time until all toxic and harmful substances have been cleared from the body (incl. from meat and milk) of the treated animal.
If more than one injection has been given the withdrawal period begins after the last treatment. Before the withdrawal period is over, milk from the treated animal must not be consumed and the animal can also not be slaughtered for meat. For meat the withdrawal period may be longer than for milk.
The dosage for a drug provided by the manufacturer ensures that the amount of the drug in the body of the treated animal is high enough to kill all bacteria or parasites causing disease.
Because drugs spread to all parts of the body large heavy animals need more of the drug than light small animals. When administering less than the recommended dose the strength of the drug inside the body is low and kills none or only some of the bacteria/parasites.
This is called underdosing – giving too little of the drug. The result of underdosing is either no cure, or an incomplete cure where the animal first improves but then relapses. To make matters worse, the remaining bacteria/parasites learn how to survive.
Advertisement